The 2022 WSOP Series just ended with huge numbers. Below you can find the most interesting of them.

The 2022 WSOP Live Series took place between May 31st and July 20th. The first interesting thing is that it was held in a new location called Bally’s Las Vegas Casino, which was rebranded and renovated for the WSOP 2022 series this spring. The hotel changed its name to a brand new one – Horseshoe Casino.

We can definitely say that this year of the WSOP series is sure to be one of the best in terms of numbers.

In terms of prize money, this 53rd annual World Series of Poker awarded a whopping $333,362,004 in prize money, beating the previous record set in 2019 by nearly $50 million (!). This staggering figure was reached in 88 live bracelet events.

According to one of the chief officials of the World Series of Poker, this year 2022 was historic for the series and a real treat for the poker community.

Below you can find the WSOP 2022 raw numbers:

In addition, there are some other interesting numbers that make this year’s WSOP really special:

Probably the last thing that remains is who is lucky (and pro) to be the winner of this magnificent event. That poker player is Espen Jørstad from Norway, who won the 2022 World Series of Poker Main Event. Along the way, he defeated Australia’s Adrian Attenborough in a heads-up duel at the series. As the winner, Jorstad took home a prize of $10 million. To achieve this monumental feat, he had to outlast 8,662 (!) other players. 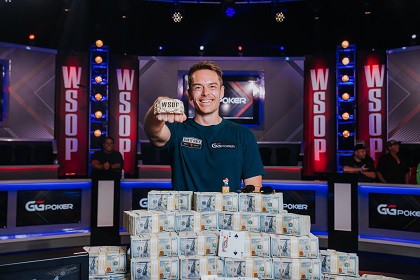 All of the above are true examples that this event will have (or probably already has) a page in the poker history book.

If you want to participate in the WSOP event, you don’t have to wait a year. The WSOP Online Series will be held at GGPoker from August 14th to September 27th with a 33-ring event. If you don’t have a GGPoker account, you can create one through rakerace.com.